It’s so strange, so weird, so unprecedented. That’s what we say to each other, as we stay at home except for the walk in the streets where hardly a car moves, and then when one comes along it sounds extraordinarily loud. You step off the pavement and walk on the carriageway when you see someone approaching. In my neighbourhood it’s as if we were all having feuds, or had been scabs/strikers during the miners’ strike, or were members of an unpopular ethnic minority. (In the high bourgeois Edinburgh where I take my airings social distancing comes more naturally than to most.)

The air is much cleaner; here in Edinburgh we’re just coming to an end of weeks of bright spring days with a chilly east wind. With blossoms and bulbs and the trees with fresh leaves, it is the most spectacular time of year. I am enjoying the lovely quiet streets then catch a glimpse of something familiar – what is that golden palace – oh one of the private schools – I’ve not seen it from that angle before. In these days of disorientation they seem fragile, as if they may become ruins soon. Charles Jencks’ installation in the grounds of the Modern Art Gallery looks like a fortification from an archaeological dig in a thousand years’ time. 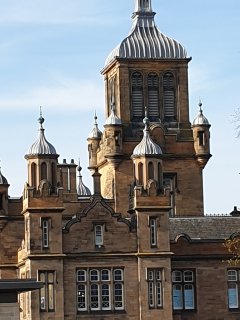 A school at an unexpected angle

What is strangest to me – and I hope anthropologists are studying this – is how quickly taboos have been established. I eye with shock someone in the supermarket riffling through packets of apples or courgettes before deciding on one. Don’t they know you don’t touch anything unless you are going to buy it? Also, when in the narrow little fish shop, after I’d waited to go in when it was empty of customers, the shop assistant brushed past me to get to the back of the shop. I reacted like a high-caste Brahmin being slapped by an untouchable. 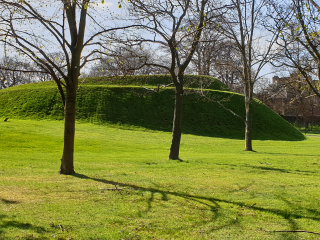 As you can get up riots and murders in Pakistan by saying the someone is a blasphemer, I await denunciations of those who have had friends around for a visit, or have tripled their daily exercise quota, with crowds turning up shouting, a pitchfork distance between each member. That ancient gentleman walking very slowly up a steep hill in Edinburgh’s Newtown – he is well past eighty, let alone seventy. He should be at home! I admire the old gent’s spirit – this might be his last glimpse of sunshine.

On a holiday in Bulgaria once we were at a street market and were gob-smacked to see a stall selling Nazi memorabilia. My companion picked up a hip flask and found she had touched a swastika stamped on it. She immediately wiped her hands with a tissue, so taboo is that symbol in our culture. She also wiped the hip flask so her fingerprints would leave no trace.

Superstition – well that is from fear. In times of insecurity you look for omens; see patterns which are unrelated to anything that could possibly happen to you or your community. If you’re an Aztec, you make human sacrifices to placate the gods; if a Roman examine the entrails; if you’re a Christian you cross yourself. Life for most human beings as been a fairly insecure thing, and superstition and ritual are one way of coping with it.

So I follow that video that a load of people posted about how to unpack your shopping, quarantining non perishables for three days in the shed; taking the courgettes and apples from their plastic bags packaging (which might have been touched by that vile blasphemer with unclean hands in the supermarket) and pouring the contents (untouched by dangerous human hands) into the chill bin or bowls. I have a special part of my work surface, soaked in disinfectant, where the unpacking and sorting is done. There are several washing of hands episodes during this whole process. Another rule is to leave all the doors in the flat open so that when I return from the dangerous outside world, I can walk straight to the bathroom and do the hand-washing without touching any door handles.

This may be a woefully wrong way of protecting myself from the virus, however it’s a ritual, so if I leave it undone I become very uneasy. I used to be fairly careless about hygiene, now I’m a neurotic.

The result is that the outside world, the one with other human beings, is a zone of danger, and home the only safe place.

We are under orders, both from the government and our employers, and there is nothing much else we can do. Our culture exalts the maverick, the policeman who takes short cuts and gets results, obstructed by his superior who goes by the book; the free spirit; – that is the individual that advertising panders to. Now we have gone collective and people are highly judgmental about neighbours not following the rules. We’re as far from the sixties let it all hang out spirit that upended our culture as we can be. We are all dutiful now.

But this is the phony war of course. We don’t know how long it will last; whether it will affect the supplies of food, let alone the luxuries. The bizarreness is of how the World War II spirit is evoked when many of us are complaining about how to get that particular type of coffee or sourdough that that little shop (now closed) provided, with the rider that we know we shouldn’t complain, plenty have it worse.

Trevor Phillips: How the “victimhood mob” seek to control the narrative