Varda’s presentation about discoveries in a National Car Park– “Very interesting talk on a fascinating hoard, and as ever with such things it throws up more questions than it answers. I mean, why were so many Cycling Proficiency Badges buried together?”

From Detectorists. And this cracks me up with laughter. It’s from Episode 3, Series 3, and the speaker is Terry, former policeman and the Chairman of the Danebury Metal Detecting Club (DMDC) and author of Common Buttons of North-West Essex. “Any questions for Varda before she rests her voice? She must be hoarse after that marathon.”

Poor Varda is normally snubbed, and barely speaks. She’s part of a Lesbian couple, the only women detectorists, because detectorism is a mostly male pursuit, like train-spotting. 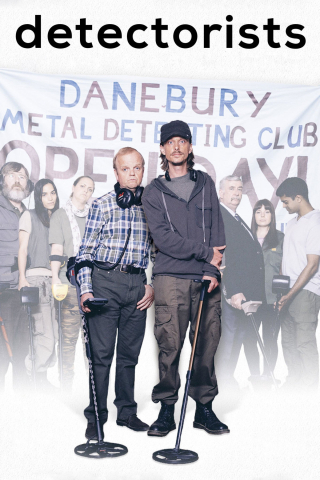 Danebury is a pretty small town in north Essex. Essex is normally a punchline for jokes about crude materialism, heavy drinking and vulgarity however, it has miles of the rolling tree-clumped English prettiness and the sense of peace and safety of the best English countryside. The DMDC meet in Danebury scout hall, hung with Union flags, where Terry’s wife, the ever smiling glammed up Sheila hands out refreshments, of varied quality.

I have come late to the series. I caught a couple of episodes by accident and I read reviews, saying much about the “quiet desperation” of the two main characters Lance (Toby Jones, brilliant as ever) and Andy, (Mackenzie Crook, best known as the creepy toadeater Gareth in The Office). These two nerdish mates go metal detecting together, and their dialogue is catch phrases, running jokes and detectorist jargon. Their lives seem to be hardly quietly desperate at all, but fulfilled since they have the refuge and focus of a harmless obsession – something we should all pray for.

Lance and Andy, scruffy and gadgetty, walk with bent heads about gentle Essex waiting for signals from the past, even from a 1980s ring-pull. Occasionally there’s a glimpse of a priest burying Anglo-Saxon jewels during a Viking raid or a Roman girl holding a pot of coins in a funeral ceremony. Their chief griefs are a rival Detectorist gang, the Dirt Sharks, troubles getting “permissions” to detect on farms and inane questions from invading tribes of Ramblers. This is Orwell’s England of eccentric hobbies and pubs, the pubs now offering open mics and pub quizzes.

The result is a great feeling of warmth towards the soulmates Andy and Lance, as they play Kerplunk together in a tent while they watch over a potential hoard threatened by thieves. Lance tells Andy that there are Kerplunks in every charity shop in the country and that Sue Ryder has a notice saying No more Kerplunks. Meanwhile the magpies watch them mockingly from their nest in a great old oak. “A lot of sunlight wasted on a tree” says the contractor who is about to knock down the great old oak to install a solar panel farm.

Their private lives can be difficult, partly because of their habit of lying to their womenfolk, however the girlfriend/wife/daughter are mostly lovely in their different ways, even Andy’s mother-in-law, Diana Rigg, a long way from Emma Peel, is kind and understanding, if ruefully realistic about her son-in-law’s short-comings.

I get fed up with the domination of comedy and comedians. Radio 4 is awash with mediocre monologuists, guffawing gagsters, woeful one-liners; there are more comedians working than engineers (I haven’t looked that up) and they aren’t funny. It’s mostly smart-arsery and tribal in-jokes. Detectorists is a comedy that I laugh at and that makes me feel happy. Also very English, like Shaun of the Dead, where Simon Pegg after a long battle against zombies, ends up in an English heaven of the Sunday papers, a roast dinner at the pub and a computer game with his zombie best mate, who he keeps in the Englishman’s haven, the garden shed.