Speaking at a private Fathom Forum in late 2018, Director of the Institute for National Security Studies, Maj. Gen. (ret.) Amos Yadlin presents an overview of the different regional threats facing Israel as well as the ongoing challenge of the Russian presence in the Middle East. Below is an edited transcript of his remarks.

Israel faces numerous strategic security challenges both on its borders and hundreds of miles away. Its main security challenges come from Hamas in Gaza, Iran’s entrenchment in Syria, Lebanese Hezbollah, and Iran’s nuclear ambitions. In order to fully understand the scope of these threats, one must analyse them on a scale of immediacy and severity [see infographic 1]. Hamas is the most immediate threat Israel faces, but the least severe. The next most immediate threat is the Syrian civil war coupled with Iran’s entrenchment in the country. After that comes the medium-term threat posed by Hezbollah, a far more severe challenge. The most severe and long-term threat Israel faces is Iran’s nuclear ambitions. This essay will analyse the scope, severity, and immediacy of these threats. 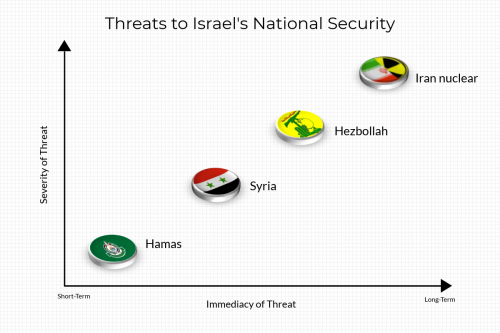 THE THREAT FROM HAMAS

When analysing the situation in Gaza, one cannot disconnect it from Israel’s other three main security challenges – the Syrian civil war, Hezbollah, and the Iranian nuclear threat. Israel’s decision not to enter a full-scale war with Hamas in November 2018 [after Hamas sent 500 rockets into southern Israel] cannot be understood without realising that there are far greater challenges the Israeli cabinet and defence establishment are worried about.

The threat Israel faces from Hamas is immediate, although the lowest on the scale of severity. Looking at Gaza, there are five potential scenarios: ‘full scale war’, ‘limited military operation’, ‘ceasefire’, ‘narrow political arrangement’, and ‘long-term agreement’ (or Hudna). READ MORE.

Israel and the Left: Three Studies of the Crisis: (1) IfNotNow and The Dyke March Controversy