This is the time of year when pundits make predictions. I have one. I am going to be furious on Boxing Day evening. The reason? Sarah Phelps’ adaptation of The ABC Murders by Agatha Christie is showing on BBC1 at 9pm, and I bet it’s going to be a travesty. She has form.

Phelps’ version of Ordeal by Innocence was shown back in April. I have written about the damnable lurid mess that Phelps made of one of Christie’s best novels with its theme of corrosive suspicion and a fifties atmosphere of Sputniks and bubble cars and evacuees grown up. Phelps turned it into a Gothic melodrama, dragged in the Korean War and the atomic bomb, changed interesting female characters into stereotypes of monstrous mother and cleavagey vamp, and added totally extraneous nonsense about establishment cover ups. Worst of all, she got rid of the clever plot twist and changed the identity of the murderer and the motive. How did the Agatha Christie estate let her get away with that?

Well, we have the culprit in the room. “James Prichard, Christie’s great-grandson and custodian of the author’s estate, said he approved of Phelps’s decision to develop the fascist undertones of the story, that is The ABC Murders.” 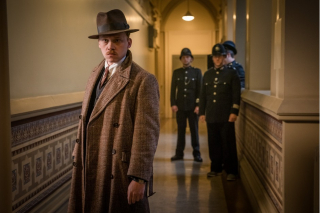 There are no fascist undertones. There are no blackshirts nor Moseley nor anything of the sort. There is a little suspicion of foreigners which often appears in Christie’s novels by which the villagers or ignorant townsfolk show their simplicity and the posh people their insularity. Poirot takes advantage of being underestimated as a foreign mountebank or confided in as an outsider who doesn’t count. It’s treated comically down to when Poirot baits the murderer with English insults (I won’t plot spoil). I know that Phelps is going to turn this into torchlight processions and broken windows and shouted insults and abuse. I can tell it by statements like this:-

Sarah Phelps, who wrote the three-part Christmas drama starring John Malkovich, has added historical context to Christie’s original story. Oswald Mosley’s British Union of Fascists are on the rise and a poster seen on a wall in the opening scene warns: “We must stem this alien tide.”..

“The language of it is exactly the language of Brexit and Trump. It’s all the same. Economically everything falls apart, with divisions sown and people looking for a scapegoat.

“Having been this celebrated Belgian detective, suddenly, being from another country is not a good thing to be. It taps into now. It’s genuinely chilling how similar it is.”

God, please save us from dramatists who have read a couple of articles about the 1930s on a website somewhere. It was you, James Prichard, you who allowed this.

“Sarah takes small things and expands them, makes them fascinating. I’ve learned a lot about my great-grandmother’s work from Sarah. I now read it differently. She explores the time they are written in,” Prichard said.

She also takes non-existent things and makes them up from whole cloth, with gratuitous shallow references to the time they are written in. Also, John Malkovich.as Poirot.. well wait and see on that. (Seen the trailer! He has a white beard! Poirot dyed his hair and only wore a moustache. Aargh. And I caught a glimpse of a black priest. Aaargh. Aargh. Not in the original of course.)

The ABC Murders is mid-rank Christie. The whole set up is a giant red herring and Cust, the stocking seller from Graham Greeneland, has real pathos. Let’s see what kind of over-garnished, over-stuffed, and over-cooked turkey Phelps turns it into.

To be fair to Phelps her adaptation of And Then There Were None at Christmas 2015 was fine. It’s set on an island, and so it’s more difficult to drag in ill-digested political and social themes. And the plot of 10 victims who are also murderers, being picked off one by one, is just about fool-proof.

Over at the London Review of Books John Lanchester has an article about Christie. Like me, he has read 50 or so of her books, and  re-reads them uninterested in whodunnit but how Christie handles the puzzle. He, a heavyweight intellectual, has to ponder why he likes reading them, and calls them formalist, in that they work within the technical constraints of detective fiction. Because Christie didn’t try to write in the stylistic sense (she said she wished she could write like Muriel Spark, but she couldn’t) her spare writing wears better than other, classier-looking writers of the Golden Age like Margery Allingham and Dorothy L Sayers. Also, she believed that people can do terrible things. Christie places malign acts in ordinary settings and I wish Sarah Phelps would do that, instead of placing malign acts among the already malign.

Lanchester has made one error. The wrongly convicted Jacko Argyle in Ordeal by Innocence was not hanged for murder. He died of pneumonia in prison. Christie’s sense of justice would never have let a wrongly convicted person be executed. She did the same in Five Little Pigs. I read everything by John Lanchester, who is so lucid that I understand banking while I’m reading him. It’s disconcerting to catch him out. The fatal, revealing slip…. Christie had a sense of wickedness but unlike Stephen King say, wickedness is punished and the innocent exonerated.

Anyway I shall be furious on Boxing Day and the two days after while the episodes of The ABC Murders show. Phelps will have murdered Christie with her great grandson Prichard as her accomplice. Bring out the Adaptation Police for the final arrest. She has provided enough evidence against her to be used in court. She is the Serial Killer.

Update:- The diabolical duo, Prichard and Phelps, were shamelessly speaking on the Today programme this morning. Phelps said she had the advantage of not reading Agatha Christie and only having seen a couple of Poirot adaptations, so she had a fresh view. And I have a fresh view of astrophysics as I am totally ignorant of it.

First episode:- Not as furious as I might have been. As The ABC Murders is a thin novel compared to other Christies, I could take this as a series based very loosely on the original. Really, it’s a story about the decline of Poirot, and Malkovich could make him a sad old refugee from the horrors of the German invasion of Belgium. Phelps paints heavy always – the light so green it seemed we were in a permanent forest, the music howled and banged and the atmosphere of a malevolent world included a landlady as creepy and weird as Igor minus the hump and her daughter a pathetic tart (in the book they are kindly and sane). Betty is tarted up from silly flirt to cock-teasing bitch – also was “dozy bastard” a common insult in the 1930s? And would the housekeeper employed by the gentry say, “Get off your skinny arse” to a secretary? Gentility and respectability were greatly valued in those times, a covering for normal hatred and malice.

I wonder if that was the first outing of the serial murderer who has become such a staple in crime drama, always murdering in threes or fours? And the type who leaves deliberate clues, so you get death methods reflecting a medieval curse or some such thing. I’ll stick with it, as I do like Malkovich and his weary ways.

So far Poirot has had his train ticket deliberately dropped by a conductor with a fascist badge, but we haven’t had any actual blackshirts kicking up. The action has been shifted from 1935 to (gasp) 1933 so we must get Moseley and his gang. That the landlady has been going to a meeting suggests she will be the house Fash.

Tom Holland‏ @holland_tom 20h20 hours ago
Well, I’m afraid #ABCMurders was absolutely ruined for me by the implausible rendering of the Waterloo-Andover line.

Tom Holland‏ @holland_tom 11h11 hours ago
Which is a shame, because otherwise it was creepily good…

(I don’t know the Waterloo to Andover line, but the lovely steam train did go puff-puff through a forest at one point. Oh, and the opening credits of railway lines are very good.)

This adaptation is a crudely modern sensibility tackling the 1930s. That’s why there are no decent and courageous people, who are always an important part of a Christie novel; that’s why the genteel flirt Betty is made over into a foul-mouthed bitch and hen-party slapper; that’s why the sister Morag is turned from plain-but-striking and clever to a fat aggressive lump. The 30s – the subtleties of a repressed society with its tiny class indicators of language, the behaviour expected from well-brought up young women, the importance of respectability – are beyond the vulgar Gothicism of Phelps.

Poirot has been made solemnly tragic with a traumatic back story instead of comic and absurd. It is one of the motifs of the Poirot stories that the absurd, fussy little man is a mighty fighter for justice and always kind. Kindness, that most important of character traits which takes away the harshness of living, and justice, are missing from the Phelps view of the world.

To the bitter end:-

ABC over, comments thread almost deid yet, and I did stick it out though by the third episode I was twitching. The only part I really enjoyed were the period clothes and the scenes on the railway lines, among sooty viaducts and the black locomotives blowing elegant steam – the railway lines motif in the credits good as well. Also no-one looks as world-weary as Malkovitch – even when he was a young lothario in Liaisons Dangereuse.

Though the fash-badge quotient ended up being low, and there wasn’t a blackshirt march to be seen, I did get awful longueurs. The brisk puzzle of an Agatha Christie dragged out and pointlessly thickened; the soupy glutinous look of the thing; Cust not just being a misery but with perverse sexual pleasures; and the pointless identification of Poirot as a priest rather than a policeman – why? He’s not Father Brown or the bloke in Grantchester. Also the stretched out dialogue between murderer and Poirot at the end – the suave cool killer obsessed with his nemesis which was reminiscent of Killing Eve. There’s a reasonable motive for the murderer’s killing spree and it is again, the fear of the mundane in Phelps. Everything fancied up and wedding cake iced over a plain sponge.

The next BBC Christie adaptation is going to be Death Comes as the End. That’s set in ancient Egypt – how is that going to be made about Brexit or the Middle East? However it is being written by Gwyneth Hughes who adapted Vanity Fair, which I thoroughly enjoyed.