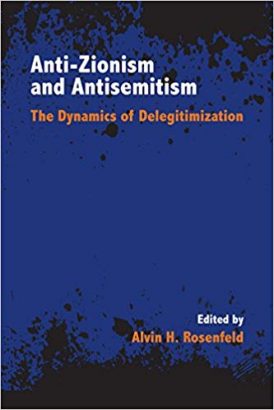 The following is an excerpt from ‘Antisemitism in the Guise of Anti-Nazism: Holocaust Inversion in the United Kingdom during Operation Protective Edge’, a chapter that will appear in Anti-Zionism and Antisemitism: The Dynamics of Delegitimization, ed. Alvin H. Rosenfeld (Indiana University Press, forthcoming).The editor and publisher have kindly agreed to the advance publication of this excerpt in light of its topicality. The UK Labour Party is debating whether to incorporate the International Holocaust Remembrance Alliance (IHRA) definition of antisemitism, including all its accompanying examples, into its own statutes. This part of my chapter sets out why the use of the Nazi analogy to attack Jews, Israelis and ‘Zionists’ should be considered antisemitic, not least because, understanding more deeply the way racism actually works, the best anti-racist scholarship and practice has long abandoned the notion that for racism to be present, a racist subjectivity and motivation, provable to boot, must be co-present. As well as being cut by two-thirds, the chapter has been edited in a couple of places to help the reader. Thanks to Alvin Rosenfeld for making this possible. (Alan Johnson)

The Nazi analogy and Holocaust inversion, which involves ‘the portrayal of Israel, Israelis and Jews as modern-day Nazis, and Palestinians as the new Holocaust-era Jews’, is a moral disease.The meaning of the analogy and the inversion —specifically, whether it is antisemitic—is contested. A locus of the dispute was the contrasting submissions of two academics, David Feldman and Ben Gidley, to the All-Party Parliamentary Group on Antisemitism’s inquiry into antisemitism in the United Kingdom during the Gaza conflict in the summer of 2014. The final report of the inquiry noted delicately that ‘there was some debate between those from whom we took expert testimony regarding the nuances of the definition of antisemitism when it comes to Nazi comparison.’  In short, Gidley defined examples of Holocaust inversion as antisemitic discourse, but Feldman, director of the Pears Institute for the Study of Antisemitism at Birkbeck University, did not, arguing that ‘the fact that they are wrong and hurtful does not render them anti-Semitic.’

Feldman advanced two reasons to deny that Holocaust inversion is antisemitic discourse. First, the inversion is banal (my word, not his)—that is, it is a ‘much used rhetorical device,’ a common rhetorical trope used in many arguments about many subjects, often light-mindedly, lacking any specifically antisemitic content. Feldman cited attacks on the UK Independence Party as Nazis as one example of banality and Israel’s leaders calling its enemies Nazis as another. Second, Feldman pointed out that the inversion is not motivated by an anti-Jewish subjectivity. The target, he points out, was Israel, not Jews; therefore, the inversion cannot be antisemitic. Only when discourse ‘endorse[s] Nazi persecution of Jews’ (e.g., brandishing a ‘Hitler Was Right!’ placard on the high street, as at least one protestor did in 2014) did Feldman consider it antisemitic.

However, both of Feldman’s arguments—(the presence of) banality and (the absence of) individual subjectivity—risk putting beyond our understanding much that is constitutive of contemporary antisemitism. READ MORE

Quick Take a Pop at Israel – Everyone Else is