This is a cross-post by Paul Canning

Since the Manchester bombings there has been an understandable need to point and either laugh or yell at some of the ‘hot takes’ circulating online.

Whether they’re coming from a comedian or some random woman with a Corbyn backpack yelling ‘conspiracy!’ at soldiers outside Downing Street. Whether its some Texas redneck Sheriff seemingly arguing that British teenage girls should be armed or, in the case of a tweet of mine which went viral, some FoxNews commentator ignorant of the IRA bombing of Manchester 21 years ago.

There’s mountains of them and they’re nigh-on impossible to resist (I should know). They’re especially difficult to resist if you can use them to make a bigger political point, as Tom Harris did in a Telegraph piece headlined ‘The Left has lost the plot if it thinks the Manchester attack was a Tory conspiracy’.

The thing is that ‘the Left’ is not, enmasse, conspiracising over Manchester, and that’s significant.

The well respected Canadian writer Terry Glavin has noticed this too. He says that “a tectonic shift in the way the “debates” around terrorism [has] lately evolved.”

In the NATO capitals, something has finally shifted in the way Islamist terror is understood. It is as though the public tolerance for claptrap and prevarication of both the leftish and rightist type has at last been reached, and a new consensus, of the kind expressed so beautifully by Mancunians this week – Muslim and otherwise – is beginning to take hold.

At the time of the London bombings, Jeremy Corbyn, then just a boring, offside Labour MP, joined with London Mayor Ken Livingstone (recently suspended from the Labur Party for his dalliances with anti-Semitism) and the disgraced former Labour MP George Galloway (a fancier of Syrian genocidaire Bashar Assad and a Hezbollah enthusiast) in blaming the London attack on Western foreign policy.

Corbyn is now the leader of a bitterly divided and vastly diminished Labour Party that is expected to be trounced by Prime Minister Theresa May in the June 8 parliamentary elections. You won’t hear Corbyn blaming the wicked former U.S. president George W. Bush for Monday night’s outrage in Manchester. It would be suicidal. Things have changed.

The Manchester massacre occurred four years to the day after Lee Rigby of the Royal Regiment of Fusiliers was butchered by “lone wolf” jihadists in the streets of Woolwich. Rigby’s throat was opened with a crude knife and he was nearly decapitated, with a meat cleaver. As recently as 2013, it was still fashionable to utter imbecilities lightening such murderers’ burden of guilt by resort to the “blowback” defence.

At the time, the famous American fantasist/documentarian Michael Moore declared that Rigby’s slaughter was understandable, because Westerners “kill people in other countries.”

This sort of vulgar “analysis” has been largely excised from respectable conversation and appears now to be confined to the sewers of public debate, where it belongs. On Tuesday, the Kremlin propaganda channel RT News found some “experts” who took up the line. So did the viciously homophobic and anti-Semitic British Hizb ut-Tahrir group, which is about as popular among British Muslims as Galloway is among Britain’s Labour Party MPs.

The leading proponents of blowback, Tariq Ali and John Pilger, have, post-Manchester, been confined to, respectively, Democracy Now! and Russia Today with their micro-audiences. Also seems that Stop The War Coalition (StWC) have STFU. They must be chafing at the bit.

Of course there are people online connecting Corbyn’s Iraq War opposition to somehow being ‘prescient’ because that War caused ISIS or something (and here is a brilliant meme from Andrew Spooner which nails down that canard). 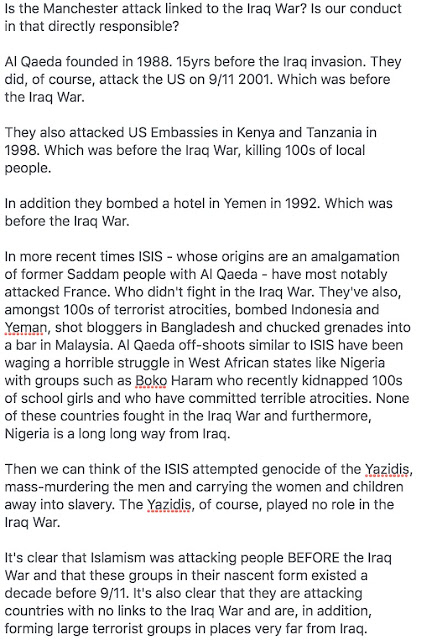 But these are fringe voices.

As I write what ‘blowback’ argument there is is coming not just from the left but from everywhere on the political spectrum and it’s about Theresa May’s stint as Home Secretary and her cuts to the police.

The people of Manchester are not unfamiliar with the horrible implications of “radicalization” among young Muslim men. The Muslim leadership in that city has been acutely concerned with the implications of jihadist recruitment and grooming for some long while.

As is so often the case, it seems the bomber was indeed reported to authorities. Whether police cuts really did play a role, given how expanded the security services have been, I don’t know, but citing them is entirely legitimate and that’s what the Corbynistas are doing along with a whole lot of other people.

What the biggest (with one exception) Corbyn supporting websites are not doing is indulging conspiracy theories, such as that the bombing was a false flag connected to the election or that the army deployment is to somehow win the election.

These websites, as Jim Waterson documented for Buzzfeed, have truly huge audiences and are consequently extremely influential but fly pretty much under the radar of Tweetminster.

Thomas G Clark (Another Angry Voice (AAV)), writes Waterson, is “measured by Facebook shares per article in the first week of the election campaign, the most viral political journalist in the entire country. “

None of AAV, The Canary, Evolve Politics, and Skwawkbox have indulged conspiracism. (The Canary even had, I swear this is true, an editorial the day after the bombing that would not have been out of place in The Guardian)

The exception is Mike Sivier’s hysterical VoxPolitical, with Sivier writing that “Mrs May’s deployment of the army indicates she is quite happy to use terror tactics on her own people.”

I wrote a comment to Sivier, which of course he won’t publish:

The evidence-free assertions that the Tories plotted this attack themselves are damaging to the fabric of British political debate. The Tories might well be an incredibly callous party, but in my view they’re also far too incompetent to pull something like that off without leaving incriminating evidence all over the place.

The important issues at the moment are that they deserve intense scrutiny about the extreme cuts they imposed on the armed forces, police, emergency services, hospitals and border agency. Also serious questions need to be asked about the emerging accusations that the bomber had been shopped to the police several times for having links to Islamist extremism.

Of course they have sailed right up to the line and there’s a lot of stuff here I think is idiotic, particularly the stuff around the bombing halting a ‘Corbyn surge’ when its clear May’s time as Home Secretary is coming back to haunt her over the issue of, of all things, security. Daniel Sugarman pointed me at this from Skwawkbox’s Steve Walker, but I don’t think its conspiracism because Walker’s not saying the troop deployment was in order to win the election (i.e. there’s a conspiracy).

And of course they have all sailed right over the line into conspiracism elsewhere. The Canary is right now doing that over the ‘Evil Hillary murdered Seth Rich who dun the Wikileaks not the Russkies’ conspiracy theory, as promoted by Fox New’s Shaun Hannity. All of them have done it over antisemitism, with Sivier being a particularly stupid example. Also, as Andrew Coates has documented, conspiracism is growing within the European left. And, as Nick Cohen and others have suggested, they may well blame the Manchester bombings June 9 for Corbyn’s defeat.

But over the Manchester bombing, as of now, most of them aren’t pushing conspiracies, and it was also notable to see Corbyn sidekick Baroness Chakrabati, the bete-noire of many reading this regarding her role around Labour and antisemitism, going out of her way to speak out against conspiracism on BBC Newnight.

Terry Glavin thinks Manchester signals that something might have changed for the better and I think the evidence suggests that it has.

What if the non-Corbynistas, the ‘sensible left’, the fans of Nick Cohen – us – have actually had an impact?

What if we were so caught up in our own bubble that we failed to notice when we’ve actually won ourselves a little victory?

*Before someone cites Rufus Hound having 1.2 million followers on Twitter the way that works is that only a tiny fraction of that number will have actually seen the Tweet. Far more will have now, of course, because it’s been amplified by the outrage to it.

Also by me, for Little Green Footballs, ‘Manchester: Defiant and Proud‘

Anti-Black Racism in Religious Communities: The Board of Deputies of British Jews takes its first step

A Hatchet Job of an Editorial in The Guardian