Here’s another episode from Jeremy Corbyn’s career which shows that he is no man of peace. Far from it. If you are violent and attack Israelis, he has your back.

In 2012 a meeting was held in Westminster Central Hall for Palestinian prisoners. Sabah al-Mukhtar was chairing the meeting. He set the tone early on:

Sabah al Mukhtar, President of the Arab Lawyers Association, who chaired the gathering, opened by reminding that, “A basic right of a people under occupation is to resist.”

Most defendants were: “just throwing stones.”

As ever with Mr Corbyn, his company was awful. The meeting was organised by MEMO, the Islamist hate publishing operation run by Daud Abdullah of Istanbul Declaration infamy. Corbyn admires him. Abdullah’s deputy at MEMO is Ibrahim Hewitt, a “very good friend” of Corbyn, a Hamas servant, and a fan of brutal sharia punishments. 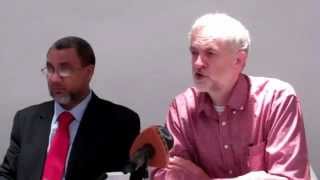 MEMO events are great for Corbyn. Here he is at another one, where he got to meet luminaries such as Abdel Bari Atwan, who would dance for delight if Iran nuked Israel and is prone to antisemitic rage fits, and Azzam “Kaboom” Tamimi.

Turning back to the Westminster MEMO meeting chair, Mr al-Mukhtar is a repellant antisemite. Here he is on the most famous antisemitic hoax of all:

At one time or another there was this talk of the Protocol of Zion and everybody said that it was a put-up job, it’s not true, it is not factual, all sorts of accusations of this book. But at the end of the day, let’s assume they are all correct, that this is really not a real book and it was not the Protocols of Zion. This is an incredible insight, some hundred years ago, to show what the position nowadays. The control over the media, the education, the law, the medicine.

Mukhtar is also a 9/11 truther. He has served as one of George Galloway’s minions on Hamas support missions (left in the picture below, with Hamas in Gaza). He managed to find a silver lining in the murder of Nick Berg in Iraq and supported the killers of British troops in that country. For good measure, he helped Abu Hamza’s legal team. A simply outstanding man for Corbyn’s world.

A group called “Ufree” also attended the MEMO meeting. It agitates for Palestinian prisoners. It works for the Hamas network in Europe and is run by the brother of Osama Hamdan, a Hamas Lebanon leader. Where there’s MEMO, there’s Hamas. One can count on this.

Nor is it any surprise in matters Corbyn to see the IRA pop up:

Organizations represented at the Seminar are working closely with those involved in the Northern Ireland hunger strike to devise a way forward for both sides.

So, endorsements of violence against Israelis, a raving antisemite, nasty British Islamists, Hamas, the IRA – no wonder Jeremy’s mind turned to friendship in this group. This is his form, this is his world.

Shaista Aziz: Another Potential Labour PPC With Skeletons in the Closet