This is a cross-post from anonymous mugwump

This is just one section of Mugwump’s post – do read it in full here.

“It’s just a joke” so goes the common refrain. The point that many on the left make – and that mostly goes unanswered because free speech advocates are too focused on normative discussions – is that it’s not just a joke. It has real world effects. Take jokes about rape or sexist jokes – what does the literature tell us? Thomae and Viki (2013) who look at whether exposure to sexist jokes vs non-sexist jokes has an impact on rape proclivity. They find: 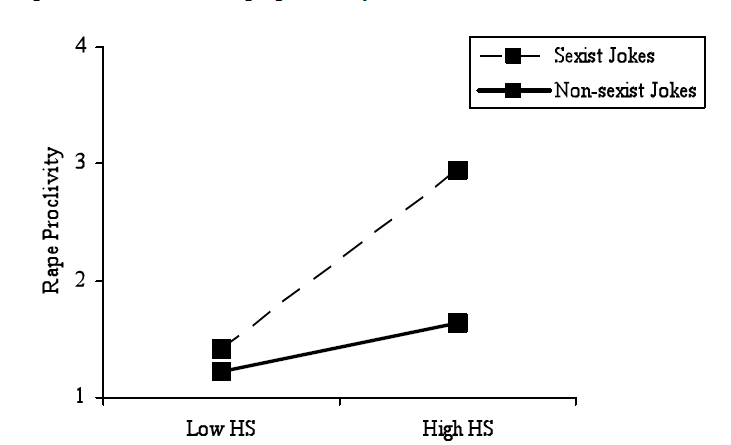 Sure, it only affects those who are already sexist – but it’s not ridiculous to suggest we should try to reduce the amount of sexist results as a result, right? Again, I happen to disagree with this conclusion but the point is this is not a straight forward normative question. Empirically, this study isn’t strong: n = 96 men from the University of Kent. It might be true. It might not be. The things that cause men to rape seem to have a broader origin than their environment so its likely that it does not. Take Långström et al (2015) who find that ‘genetic factors (40%) and non-shared environmental factors (58%) explained the liability to offend sexually more than shared environmental influences (2%).’

Ford et al (2001) suggest another way sexist humour may have a negative effect:

(1) for men high in hostile sexism, exposure to sexist humor creates a perceived social norm of tolerance of sexism relative to exposure to nonhumorous sexist communication or neutral humor, and (2) due to this ‘relaxed’ normative standard in the context of sexist humor, men high in hostile sexism anticipated feeling less self-directed negative affect upon imagining that they had behaved in a sexist manner.

Some of this is tautological: hearing something get approved makes you think its.. approved. But do we want all ideas approved? The argument from a free speech advocate (in fact, it’s an argument I made in Part 1!) is that if you give air to an idea, you can expose it. But what if that’s not the case? You can bleat on about ‘exposing ideas’ and free speech being great but you haven’t evidenced anything. And there’s a slightly persuasive reason why this may not be the case for sexist jokes. Here’s an extract from the Thomae and Viki study:

a humorous communication activates a conversational rule of levity, resulting in a non-serious mind-set on the part of the receiver, which prevents messages from being interpreted critically. By switching to a non-serious mind-set, the recipient accepts the local norm implied by the humor.

I don’t care about GamerGate. It doesn’t show anything about society, the ‘left’, men, feminists – nothing. It’s boring. My cursory glance at the literature leads me to conclude that the most popular video games are, on average, sexist. For example, Burgess et al (2007) looked at 250 video game covers and found that over two thirds of the female characters (compared to 10% of male characters) were represented in stereotyped gender roles or the subject of physical objectification.

I’m more interested in the literature of what the effect of video games on sexism is. Anita Sarkissian’s series on video games and sexism is probably the most well known exposition of the view that is has a negative impact. I find that people either give Sarkissian too much credit or not enough. One of her most prominent critics is the Youtuber Thunderfoot. Thunderfoot doesn’t really seem to accept the nuance in Sarkissian’s videos. Here is what she says:

Likewise engaging with these games is not going to magically transform players into raging sexists. We typically don’t have a monkey-see monkey-do, direct cause and effect relationship with the media we consume. Cultural influence works in much more subtle and complicated ways, however media narratives do have a powerful cultivation effect helping to shape cultural attitudes and opinions.

Sarkissian is caricatured as saying that video games make people sexist, this is clearly not the case. But the reason I think people give her too much credit is because this nuance is frequently lost. Here is what she says elsewhere in her video series:

.. the negative impacts of sexual objectification have been studied extensively over the years and the effects on people of all genders are quite clear and very serious. Research has consistently found that exposure to these types of images negatively impacts perceptions and beliefs about real world women and reinforces harmful myths about sexual violence.

You can very easily read these statements as not contradicting each other but I think its incredibly slippery. Apologies for the cross-referencing, but this is precisely the problem with the Eustonite response to my post about Islamism. “I’m not saying x causes y, but x creates a culture in which y can thrive or it creates the “mood music” for y” – this is the refrain of the some feminists clamouring for censorship, Eustonites who have a deep desire to make Islamism relevant and, to my mind, people making meaningless claims. While we’re here, take Sarah Ditum’s recent New Statesmen article:

It is not a question of whether pornography “caused” Matthews and Hoare to commit their crime. What matters is this: in a world sodden with violence against women, pornography is one more form of it.

Oh right, cool, I get it. There’s no causal claims being made. It’s just that pornography is one example of sexism. I got it. That seems like a reasonable claim. And yet, in the same article that utters that this is not about causation (or even correlation), you will get this:

What?! You just said you weren’t making a causal claim! Sarah Ditum is either making a meaningless argument (if we are saying there is no causal impact) or being inconsistent. Moving on to what the literature actually says, for someone who prides themselves in being a scientist, Thunderfoot doesn’t cite any research in support of his position that video games do not lead to violence/sexism. Anita Sarkissian does provide studies which support her claims. Yao et al (2010) took a group of individuals (n = 74) some of which played games with high sexual content and others with a control game. They then carried out a likelihood-to-sexually-harass scale and found: 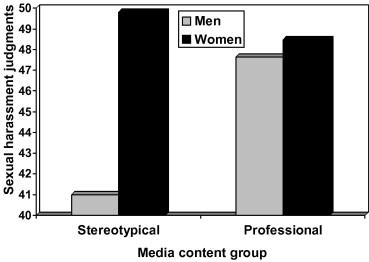 The authors suggest that the reason that women subjected to the stereotype condition have lower sexual harassment judgments is because they become galvanised after seeing sexist depictions. The idea, then, that Sarkissian is pulling her arguments out of thin air should be roundly rejected. That said, as I was reading through these studies issues of ecological validity entered my mind. We have already seen that in the context of porn and video games that the experimental literature doesn’t tell us a great deal about the way the world actually is because of the short term effects. I know of one (kind of alright) study that looks beyond this and finds video game use predicts benevolent sexism (Stermer and Burkey (2012)).

The paragraph above was drafted as the final paragraph to this section – and it bothered me because I couldn’t provide a real-world-effects study that gave us a better answer – until I came across Breuer et al (2015). Breur et al note that all of the previous literature (much of it cited above) does point to ‘second order effects’ (i.e., sexism) but that:

…no cross-sectional association between sexist attitudes and overall video game use for both men and women. On the longitudinal level, the only statistically significant finding was a negative association between video game use at time 1 and sexist attitudes at time 2 for males ( p = 0.027). However, the size of this effect (b = –0.08) can be considered negligible. All other longitudinal associations were both small and nonsignificant (b < 0.13).

Fortunately, my approach to free speech does not require me to make definitive statements about any of this literature (for reasons that will be apparent in Part 3). It appears the experimental literature mostly agrees with Sarkissian but the empirical literature otherwise is in its early stages with contrary results. I’m sure depending on which side of the issue you’re on, you’ll cherry pick. I would note the literature above should not allow you to be confident in any view. Breur et al is the first study of its kind and I’m sure there will be a lot more which goes in either direction. If I had to express a view, it would be one that took into account all the literature in this post which suggests little effect.

Time for Action Against the Chinese Communist Party

Takfir – The Salafi Ideology That Makes Everyone Fair Game