This is a cross-post by Paul Canning

On Monday night the Stop The War Coalition (STWC) held a public meeting at the House of Commons – Syria: the case against military intervention.

Diane Abbott MP was the Chair. There were the usual suspects as speakers plus Tory MP Crispin Blunt, whose Foreign Affairs Select Committee had just delivered a report against any British involvement in Syria. Plus Alex Salmond and Caroline Lucas. Conspicuous by their absence as speakers were Syrians, the STWC refused to give any a platform.

Salmond’s SNP did give a Syrian a platform, Dr Amer Masri, on stage at their recent conference (many in the audience wept). Praising this, the Syria Solidarity Movement (SSM) noted the STWC refusal this last Monday and that:

SSM were also blocked from speaking at an April solidarity with refugees march – by STWC. This led to an apology from the march’s organisers!

Last month Birmingham STWC dared to invite a speaker from SSM but were forced to withdraw the invitation and were told SSM ‘backs imperialists’. 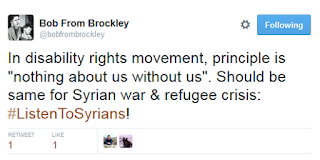 When SSM leafleted a “overwhelmingly white and middle aged” STWC conference in June they were insulted, and called in language which would make Kremlin propagandists proud “the pro-ISIS lot”.

Yet they do not have an issue with some Syrians. In 2012 STWC platformed a Baathist and in 2013 thecontroversial nun Mother Agnes – which backfired when no one would sit on the same platform as her.

On Monday at the House of Commons, says Peter Tatchell:

Some Syrian victims of Assad’s brutalities turned up anyway but were not allowed to speak. They eventually shouted out in frustration, turning the meeting into momentary chaos, as they were jeered by some of the audience and as STWC stewards tried to eject them – allegedly threatening that they’d be arrested. The police turned up soon afterwards.

When it came to questions from the floor, other members of the audience were asked to speak but not the Syrians.

Near the end of the meeting, I personally appealed to Diane Abbott to let the Syrians have their say but she refused and closed the meeting.