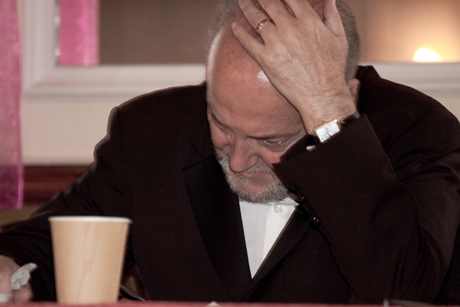 A detailed account in the Guardian’s Northerner Blog of a Galloway ‘sermon’ to Muslim women in Bradford.

Galloway used the meeting as an attempt to rebuild his support among Muslim women, following his appalling comments about rape. It seems Muslim women, like most women and must people in general weren’t particularly impressed by G.G’s view that “not everybody needs to be asked prior to each insertion.”.

Evading the issue of an apology, and appealing instead to our Muslim sensibility, Galloway continued: “Rape is a vile crime. Mass murder is worse. The invasion and occupation of one Muslim country after another by the United States is even worse.” Despite assertions from a representative from Bradford Against Consent that “This isn’t about Julian Assange. It’s about survivors of sexual assault,” Galloway remained unrepentant, simply reiterating that, “Every word I said in my podcast I stand by.”

Respect’s sole MP also came under attack from the women, many of whom identified themselves as mothers and grandmothers of disabled children, for his recent use of a pejorative term for a disabled person on Twitter.

It makes you wonder if there any allies left for Galloway to upset?