Further to their previous open letter to the South East Gospel Partnership, in the interests of transparency, here follows a timeline which discloses the evidence behind the claims of the Rev’d Nick Howard and James Mendelsohn about the Rev’d Dr Stephen Sizer(NB none of the emails disclosed in this post were marked ‘Private and Confidential’.)

Dr Sizer posts a link on his Facebook page to the racist website ‘The Ugly Truth: Zionism, Jewish extremism and a few other nasty items making our world uninhabitable today’. No one, including Dr Sizer, denies the posting of the link or the anti-Semitic nature of the website.

The following complaint is sent to Christopher Hill, Bishop of Guildford:

I am writing to appeal to you to suspend Rev. Stephen Sizer from his duties as vicar of Christ Church, Virginia Water.

Although I feel there are many grounds for such a severe action, I want to focus on just one, which is his use of Facebook. As you will know, the Bishop of Willesden was suspended last year after making inappropriate comments about the Royal Family on Facebook. Yet Rev. Sizer has recently used Facebook in a much more disturbing and offensive way.

On October 4th he posted a link on his Facebook page to an anti-Semitic hate website called ‘The Ugly Truth: Zionism, Jewish extremism and a few other nasty items making our world uninhabitable today’. The website greets its visitors with unbelievably racist cartoons (see the attached example).

The specific article recommended by Rev. Sizer is accompanied by a cartoon by the Brazilian cartoonist ‘Latuff’, runner-up in the notorious 2006 Iranian ‘International Holocaust Cartoon Competition’. As you can see from the attachment, it is appallingly insensitive.

Rev. Sizer might claim that the particular article he recommended is not in itself anti-Semitic. Yet it cannot be denied that the website hosting the article is anti-Semitic. Rev. Sizer has directed his 800 Facebook friends, without any word of warning, apology or qualification, to a website whose banner claims that Zionists (that is, patriotic Israelis) make ‘our world uninhabitable’. This extreme hostility towards Israel, which lies far outside the boundaries of respectable debate about the Middle East, would immediately be recognised by Jewish people as anti-Semitic, even without the above-mentioned cartoons which put that beyond doubt.

I am sorry to have to bring such disturbing material to your attention, but I hope you will agree that it gives you the opportunity to take decisive action to uphold the reputation of the Church of England. If the Bishop of Willesden’s inappropriate use of Facebook merited suspension, how much more does Rev. Sizer’s. 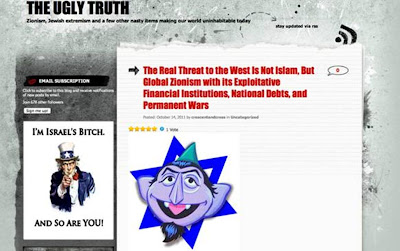 Thank you for your message in criticism of the Revd Stephen Sizer. Your comparison with the Bishop of Willesden is not in fact exactly correct. The Bishop of Willesden technically suspended himself, it was not a disciplinary process. I am not denying that the Bishop’s remarks were highly inappropriate and embarrassing to say the least.

The Revd Stephen Sizer’s opinions are clearly radically different from your own. I shall speak to the Revd Stephen Sizer about his use of Facebook but at the moment I see nothing which would merit disciplinary matters, not least because differing political opinions are definitely exempted from disciplinary proceedings in the Church of England according to the Clergy Disciplinary Measure. There may be changes to the Measure in the future which would make it possible that membership or support of the British National Party, for example, could become a disciplinary matter. But I am sure that Stephen Sizer himself would be highly critical of neo fascist movements as well as the fascism in the past which created the awfulness of the holocaust.

There is also the question of the uncontrollable linkage on of Facebook. One does not have control of that when one may not always agree with other people on related face books. This is one of the reasons I am somewhat cautious about Facebook myself and am not on it.

Bishop Christopher sends a copy of the 16th November complaint to Dr Sizer. This is later confirmed by the following email (emphasis added):

In Bishop Christopher’s absence I can confirm that it seems that he did copy your email of 16 November to Dr Sizer who acknowledged it the same day, ie 22 November. This email did include the screenshots.

(I can’t of course confirm whether the latter would show on Dr Sizer’s computer if eg he was reading in plain text, in which case they may have appeared as attachments, if at all.)

I trust this answers your questions.

As revealed above by Rev’d Mark Heather, Dr Sizer emails the Bishop of Guildford acknowledging receipt of his email about the link to ‘The Ugly Truth’. To respond on the same day was highly efficient. But sadly, and tellingly, Dr Sizer did not also take the trouble to remove the link from his Facebook page. (To do so would have been very easy: he simply had to click on a drop-down list next to the link, select ‘Delete Post…’ and then choose between ‘Delete Post’ or ‘Cancel’.)

Under pressure from the Jewish Chronicle, Sizer at last removes the link to ‘The Ugly Truth’ from his Facebook page.

Not content with posting a link to ‘The Ugly Truth’ on Facebook, Dr Sizer posts a link to ‘Veterans Today’, an equally sickening anti-Semitic website, on his blog.

The Council of Christians and Jews issues a press release titled ‘CCJ Statement about Antisemitic website‘, which includes the following comment:

The Rt. Revd Nigel McCulloch, the Bishop of Manchester and Chairman of CCJ said: “The content and the delay in removing the link from Mr Sizer’s Facebook page was disgraceful and unbecoming for a clergyman of the Church of England to promote. Members of the CCJ have described the website as ‘obscenely antisemitic.’”

The Diocese of Guildford releases a defensive statement in response to the CCJ (emphasis added):

‘The allegation, as the Bishop understands it, is that Mr Sizer did not withdraw his reference swiftly enough once the nature of the website had been pointed out to him [i.e. on 22nd November]. The Bishop was informed by Mr Sizer that he had taken earlier steps to withdraw the reference, but that these had not effectively removed it, until January of this year.’

Dr Sizer posts an open letter on his blog titled ‘Response to the Council of Christians and Jews’, in which he says the following (emphasis added):

‘On 4 October 2011, I posted a link to an essay “Israel’s Window to Bomb Iran”, by Ray McGovern, an ex-CIA analyst, commenting on circumstances in which Israel might attack Iran. Regrettably the link that I used was not to the original website but to a different website which I now know contained scurrilous and offensive material. I was made aware of this on 3 January 2012 as a result of an enquiry by the Jewish Chronicle. I could not find the link and assumed, wrongly, that I had removed it. I found it on 4 January 2012 and removed it immediately… Some ten weeks later, on 13 March 2012, the Council for Christians and Jews… said that I was “alerted to the anti-Semitic nature of the website in November and again in December, but only removed the link in January when contacted by the Jewish Chronicle.” Whatever the CCJ might think has happened I have explained here how and when the link came to my attention. It did not come to my attention before then… If the CCJ does not feel able to make it clear that its allegations were ill founded it will, I hope, reflect on the reliability of its informants and think very hard before naming people who might in the future be the innocent victims of ill-considered complaints.’

It is quite astonishing that Dr Sizer describes himself as an ‘innocent victim’ of ‘ill-considered complaints’. He knew perfectly well that the CCJ’s charge was in fact wholly accurate, i.e. that he had only removed the link in January despite being warned in November. He was even contradicting his own diocese’s response to the CCJ, which had been to claim that the six-week delay was the result of ineffective attempts to remove the link (see 14th March above). The CCJ’s Patron has been HM the Queen since 1952 and its Presidents include the Archbishop of Canterbury and the Chief Rabbi. It is the UK’s oldest Jewish/Christian interfaith organisation. Dr Sizer brazenly sought to harm its reputation, and the reputation of its ‘informants’, on an entirely false basis.

Not content with posting links to ‘The Ugly Truth’ and ‘Veterans Today’, Dr Sizer posts a link to yet another racist website: ‘Window into Palestine’. Defending himself in the Jewish Chronicle, Sizer says ‘There was no suggestion of any offensive material in the story to which I linked’ – and yet the title of that story was ‘The BBC caught out with its Zionist-run propaganda machine’, which the vast majority of Jewish people would immediately recognise as anti-Semitic (and utterly ridiculous). Dr Sizer also told the JC, ‘I only came across [the article] after conducting a Google image search for the photo by Marco Di Lauro, which was central to the apparent BBC error which I wished to highlight.’ He was seeking to explain what he was doing viewing a racist website in the first place, let alone posting a link to it. But his explanation was easy to test. Numerous people at the time tried ‘conducting a Google image search for the photo by Marco Di Lauro’ and yet ‘Window into Palestine’ was nowhere to be seen in the results.

The Committee of the South East Gospel Partnership, despite being aware of the above, say they see ‘no justifiable grounds for breaking gospel partnership with Stephen or with Christ Church Virginia Water.’

Let’s close with just a few of the many questions arising from this timeline.

1. Quite apart from the anti-Semitism, why does the congregation of Christ Church Virginia Water allow such a mendacious man to care for their souls?

2. Why did the Diocese of Guildford, in full possession of the relevant facts, allow Dr Sizer’s slanderous attack on the Council of Christians and Jews to remain uncorrected?

3. How many more racist links will it take before the Committee of the South East Gospel Partnership see ‘justifiable grounds for breaking gospel partnership’ with Dr Sizer and his church? Two or twenty-two?