The PSC relies upon Ben White to provide arguments, as to why people should boycott the Habima theatre company.

Ben White has recently posted this message about Habima (click to enlarge):

“If you need another reason to support a boycott of Habima, I present a massive picture of Howard Jacobson’s face”

Here is the picture of Howard Jacobson:

In what possible way, is the face of Jewish writer Howard Jacobson, relevant to why you should boycott Jewish actors?

It would be foolish enough, to suggest that the argument that Howard Jacobson made in favour of letting Habima perform, could be reason enough to boycott people who are not Howard Jacobson himself.

However, Ben White appears to be linking Howard Jacobson – an English Jew – and Israeli Jewish Habima actors, by aesthetics and looks. If you are aware of the history of antisemitism, you will know that a great deal of attention was given to the physical appearance of Jews, who were portrayed as people whom one could legitimately hate based on how they look.

This creepy message about a Jew’s face, rather reminds me of Emmanuel Goldstein in 1984, and the Two Minutes Hate which Orwell portrayed, in which just by looking at this “lean Jewish face”, hatred could be harnessed.

This is the level that Ben White is operating at.

That, and boasting about briefly trending on Twitter underneath the word “Duckbutt“, before the trend was likely overtaken by “One Direction Is Better Than The Wanted” and “We Love Justin Bieber”. 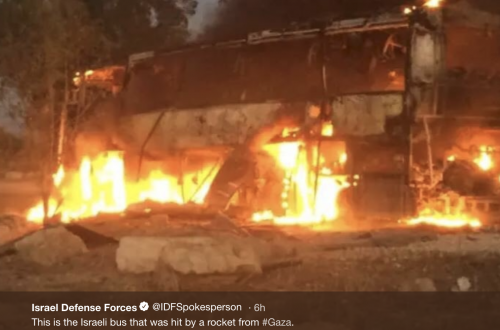 Israel and Gaza Toe to Toe Once Again