This is a cross post by Aymenn Jawad  Al-Tamimi

Amid all the debate as to what lies in store for Libya, it is becoming increasingly apparent that Islamism will be the dominant political force in the country.

Indeed, this trend should already have been clear in the treatment of David Gerbi, a Libyan Jew residing in Italy who returned to his ancestral homeland in the summer to fight alongside the rebels against Gaddafi. Yet when he tried to rebuild and reopen the abandoned and desolate synagogue in Tripoli, he faced death threats, intimidation and protests, such that he was eventually deported. The National Transitional Council (NTC) dismissed this matter as one of no importance.

In this context, it is noteworthy that the treatment of Gerbi was in accordance with traditional Islamic law’s views on the status of dhimmis (i.e. Jews or Christians), for dhimmis are not allowed to reconstruct their buildings of worship or build new synagogues and churches.

Linked to the point about Islamic law are the recent announcements of Mustafa Abdul-Jalil, the chairman and de facto president of the NTC, that Sharia will be the “basic source” of all law in Libya. Coming to specifics, Abdul-Jalil declared that a Gaddafi-era law that banned polygamy would be lifted, saying that it was “contrary to Sharia and must be stopped.”

The NTC chairman is of course correct that Sharia traditionally permits polygamy, being rooted in Quran 4:3, which allows a man to take as many as four wives. While the verse exhorts a man who has more than one wife to “deal justly” with all of them, on traditional interpretations this does not mean treating them equally. Rather, as Ibn Kathir puts it, doing so is only “recommended,” and even without equal treatment, “there is no harm on him.”

Abdul-Jalil further declared the need for future bank regulations to comply with Sharia, claiming that “interest creates disease and hatred among people.”  One should also compare his statements on the role of Sharia with the draft Constitution for the Libyan opposition, as reported on in late August. As Andrew Bostom notes, the most striking feature is the opening (Part 1, Article 1), which affirms that “Islam is the religion of the state, and the principal source of legislation is Islamic jurisprudence (Sharia).”

The emphasis on the definite article before “principal source”  is my own. It is an undeniably Islamist outlook. It must be contrasted with, for example, Iraqi Prime Minister Nouri al-Maliki’s State of Law bloc, which only views Sharia as a source of legislation, and not necessarily the main one.

Assuming that Abdul-Jalil (who, with a Zabibah-marking on his forehead from performing the Muslim prayer ritual, certainly conveys an image of fervent devotion) is not necessarily sincere in his Islamist pronouncements is hardly reassuring, because then it follows that he feels a need to pander to a very powerful Islamist faction in the country.

In any event, the implications of the trend towards imposing Sharia are truly alarming, yet unfortunately, as Hussein Ibish says, “there is an intellectually and politically indefensible rush to recast the leading Arab Islamist parties as more moderate or pluralistic than they actually are… it’ s simply foolish not to recognize that they remain in every meaningful sense radical and retain their totalitarian impulses. That they would like to broadly and severely restrict the rights of individuals, women and minorities in the name of religion is obvious.”

Quite so, and while Ibish is also right that strong constitutional checks on the government’s powers could force some Islamists to moderate their ideology, the signs for such a development in Libya are virtually non-existent. There is no discussion in NTC circles remotely along the lines of what Ibish advocates regarding the relationship between government and democracy.

More specifically, reports in Benghazi have pointed out the presence of one variant of the al Qaeda flag on top of Benghazi’s courthouse (displaying the full Shahadah — declaration of Islamic faith — and a circle underneath against a black background). As Sherif Elhelwa further notes: “According to one Benghazi resident, Islamists driving brand-new SUVs and waving the black al Qaeda flag drive the city’s streets at night shouting, ‘Islamiya, Islamiya! No East, nor West,’ a reference to previous worries that the country would be bifurcated between Gaddafi opponents in the east and the pro-Gaddafi elements in the west.”

Some observers have been quick to dismiss Elhelwa’s account as an isolated example, but John Rosenthal has drawn attention to more photos of demonstrators waving al Qaeda flags, bearing another familiar pattern of the first half of the Shahadah — la illa ha ill allah (“there is no deity but God”) — and a circle underneath bearing the slogan “Allah, Rasul Mohammed” (“God, ProphetMohammed”): compare with the flag of al-Shabaab, a Somali al Qaeda affiliate.

This development simply cannot be downplayed, and it is notable anyway how Elhelwa was threatened by a security guard for taking photos of the flag on the Benghazi courthouse. The guard reportedly said to her, “Whosoever speaks ill of this flag, we will cut off his tongue. I recommend that you don’t publish these. You will bring trouble to yourself.”

Readers may wonder why some of the flags have a black background, and some a white background. The answer is that the black flag represents al-Qa’ ida’ s war banner in the struggle againstDar al-Harb (consisting of non-Muslims or Muslim ‘heretics’  to be subdued under Islamic law), while the white flag symbolizes Dar al-Islam. In the case of the former, the demonstrators may have in mind targets outside Libya, or some of the rebel militias from Misrata and Zintan who have grown alarmed at the Islamist presence in the west of the country — particularly in Tripoli — and have thus formed a coalition to try to compete with the Islamists for influence, vying for control of the capital’ s harbor and airports.

Meanwhile, outside the headquarters of the NTC, hundreds of Libyan Islamists, who had of course aided the effort to overthrow Gaddafi, have held protests calling on the NTC to pressure Baghdad into halting the execution of Libyan foreign fighters imprisoned in the country.

These insurgents, fighting for al Qaeda in Iraq, have been responsible for many of the most brutal attacks on Iraqi civilians since 2003. In fact, one of the militants responsible for the horrific assault on the Syriac Catholic Our Lady of Salvation Church in Baghdad last year — an attack that killed dozens of worshippers (the anniversary was commemorated just last week) — was Libyan. Oh, how cruel the Iraqis are to mistreat those noble Libyan jihadists!

The emerging picture is therefore clearly one of a strong (pan)-Islamist influence at the leadership level and on the ground, especially in Benghazi and the surrounding eastern areas where the revolt against Gaddafi first began.

Not only could this development pose a security threat to the outside world, but there is also good reason to be concerned in particular for the Libyan Berber minority, which is eager to assert its civil and cultural rights after decades of repression, came out in support of Gerbi’s efforts to renovate the abandoned Tripoli synagogue, andhas clashed with Arab tribesmen around Tripoli. The Algerian and Sudanese experiences show that Islamists in the Middle East and North Africa do not look kindly on non-Arab minorities who try to assert their own identity and culture.

Thus, while Gaddafi loyalists of the powerful Warfalla tribe vow revenge and localized militias continue to fight each other, expect internal conflict to be a feature of the Libyan landscape for quite some time as well.

Update: The comments are closed. 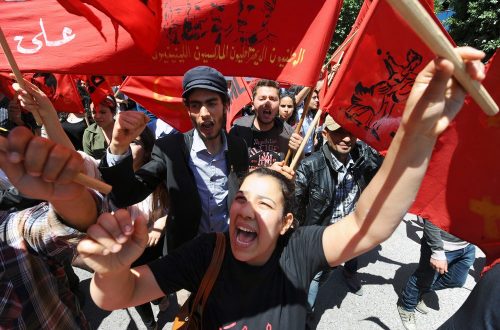