This is a cross-post from Ted Jeory

On New Year’s Day, I posted this on this blog and entitled it “Tower Hamlets council starts to get a grip.” I said the council should be congratulated for finally taking the initiative in vetting people before helping to promote them.

The post concerned a Raising the Nation event at the Brady Centre in Whitechapel, which had been organised by the Tayyibun Institute whose headquarters are less than a mile away in New Road (more about them another time).

The Tayyibun had invited Abu Abdissalam to teach women about the kind of child rearing techniques that would deliver “a victorious Ummah”. However, as I noted in January, someone at the council had done their homework on Abdissalam and insisted his name be removed from the list of speakers before the Brady could be booked.

Here’s what I wrote in January:

Believed to be aged in his 30s, he was born in Coventry and raised in London. He gained a degree in Computer Science from City University and then went to study Islamic Studies in Saudi Arabia.

He doesn’t much like the West […] in fact he appears to be brimming with anger.

Full details about him can be seen on the Harry’s Place website here. He makes references to the stoning to death of adulterers, chopping off the hands of thieves and to Ali Al-Timini, the US cleric convicted for plotting terrorism in the wake of 9/11.

And here’s the statement from the council’s communications department from January:

“Mr Abdissalam was on an original list of speakers for this event, but was flagged up in our booking protocols (the Conditions of Hire) as someone of concern. The organisers were therefore asked to remove him from the list of speakers, which they did, and the event went ahead without him today.”

So if the council know him as “someone of concern”, why is its communications department helping to promote his work again? In each of the last two editions of the council’s East End Life paper, the following advert has appeared: 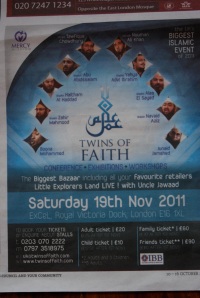 It’s an advert for the Twins of Faith event at the Excel Centre in Newham. As you can see, Abdissalam is one of the speakers.

The publicity on its website here says the event, which will have “fully segregated seating” will be all about “inspiring positive change”.

If the council really is sincere about rooting out extremist thinking and prove that it really is getting a grip, it has to demonstrate that it is aware of these issues across all its departments and not just showboat on the obvious bookings of halls.

This is particularly so of East End Life.We’re told that the editor has “independence” from communications boss Takki Sulaiman but who is overseeing the paper’s advertising team. The problem is that that team, which is run by Chris Payne, is driven entirely by monetary targets. They’re not well-trained: they’d be able to spot Nick Griffin’s name on an advert but not many others.

This is not the first time it has accepted these kinds of adverts is it? A few months ago, East End Life was running adverts for Anjem Choudary’s new evening school in Whitechapel. After those ads were highlighted here, none have since appeared.

Its vetting procedures need to be strengthened. I’d suggest that they have stronger links with a body such as the Quilliam Foundation to advise on whether there are potential problems when requests for such adverts come in.

All this, of course, is very helpful evidence for Eric Pickles, Grant Shapps and Bob Neill, who, as predicted said here last week, will be looking at ways to bring these council newspapers on to a statutory footing.