If they want Islamic banking, crave Lebanese mezze at the dozens of restaurants and kebab houses, or hanker for a hookah pipe, the cognoscenti head for the Edgware Road, W2, in London. Here the hijab-clad women and Arabic signage make you feel, for all the world, that you are in the Middle East.

And so it was a trifle daunting – but also appropriate – that Sunday’s event concerning the Jews of the Middle East and North Africa, Harif‘sThe Jewish Nakba:remembering Jewish refugees from Arab countries, should have been held in the heart of London’s Levant. 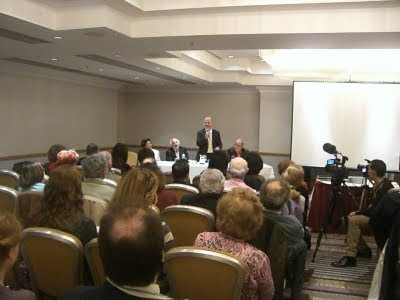 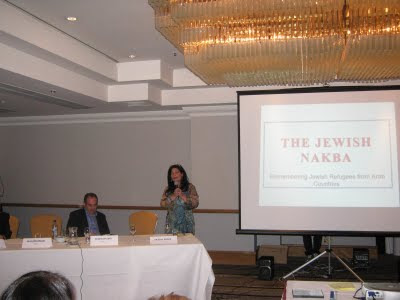 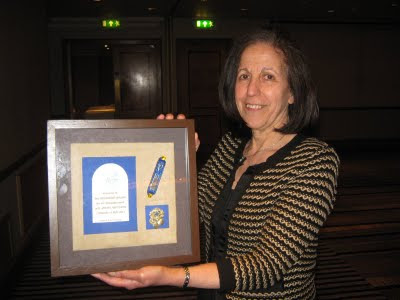 (Top) Some 80 people heard the harrowing stories of refugees from Egypt, Libya and Iraq. (Middle) Tom Gross and Michelle Huberman. (Bottom) Refugee from Iraq Nadia Nathan holds the award presented on Harif’s behalf by Tom Gross to Rosemond Nissan for her work with refugees. (Photos: Gili and Niran)
The police, however, were taking no chances. Guests had to brave a ring of steely officers on entry to the hotel, going through airport-style security so tight that some bona fide latecomers were turned away. The organisers were not allowed to advertise their meeting lest the expression Jewish Nakba appearing on a hotel screen might incite some hothead with a kebab skewer to go on the rampage.

The date chosen was deliberate: 15 May was Nakba Day for the Palestinians, but it was also an opportunity to tell the world about a second Nakba – the mass displacement of almost a million Jews from the Arab world.

Before an audience of 80 people, Jewish refugees told their harrowing stories. Colette Littman was forced to flee Egypt in 1956 after days of listening to the mob screaming Ytbah al yahud in the streets of Cairo below her apartment.The family’s cook Omar was found sharpening a kitchen knife: what was he doing? she asked him. ‘Getting ready to kill the Jews’, came the reply.

Colette left with only the clothes she was wearing and her suitcase was ransacked at the airport. Not only did Egyptian Jews face an uncertain future in exile, but they underwent the emotional trauma of seeing their communities destroyed and their families scattered to the ends of the earth.

Elia Meghnagi left Benghazi in Libya in 1958 to study abroad. His early memories are of brawls between Arab and Jewish youths. As a stateless student in England, he was forced to support himself. Later, he arranged for his family to join him, but they had to leave all their property and belongings behind. They quietly slipped out, leaving the table set as if for a meal so as not to arouse the neighbours’ suspicions. Back in England, visiting the Libyan embassy in order to regularise his status, Elia narrowly escaped being bundled into a plane and forcibly returned to Libya.

Edwin Shuker’s family had lived in Mesopotamia – now Iraq – for 2,700 years. One of five thousand Jews still left in the country after the mass exodus of 1950 -51, Edwin witnessed the noose tightening around the community’s necks in the sixties, when Jews had to carry yellow identity papers. Then came the horrific hangings of 1969, when a mob half a million strong picknicked under the corpses of nine innocent Jews suspended from the gallows in the main square. Edwin’s family had to leave like thieves in the night, leaving 2,700 years of history behind.

Dr Saul Zadka, academic, author and journalist, who described himself as a ‘refugee at heart’, gave an incisive political analysis of the refugee issue. The two cases were quite different. Some 100,000 Palestinian ‘refugees’ belonging to well-to-do families left the country a year earlier with their money and belongings with every intention of returning when the Jews had been crushed. A million Arabs, many of them hostile to Israel, lived as full citizens with more rights than any of their fellow countrymen in Arab states. Jews in Arab lands were loyal citizens, yet were rewarded with murderous riots in Iraq, Libya and Aden before the creation of Israel. It was a hopeful development that the US Congress had passed a resolution in 2008 demanding parity between Jewish and Palestinian refugees, but the Israeli government was still doing too little, too late. Dr Zadka himself distributed a statement to the audience demanding that Jewish refugee rights be recognised and compensation for property many times more valuable than Palestinian losses, as the Jews were big city dwellers while the Palestinians were largely poor farmers who supported the invading armies.

Following a showing of the 15-minute short version of the filmForgotten Refugees, the international relations expert Tom Gross said that the Jewish refugee issue was the single most important issue on the Middle East agenda. “Borders can be agreed, Jerusalem can be divided, but there is no answer to the Palestinian ‘right of return’ – apart from the refugees of the Jewish Nakba, ” he said. Yet few knew about it – and he seriously doubted if Prime minister David Cameron and Foreign Secretary William Hague had even heard of it. As far as Israel advocacy was concerned, no session at ‘We believe in Israel’ conference taking place that day dealt with the topic. As for the press and media, they were mesmerised with the PalestinianNakba to the exclusion of other news and other refugees.

On behalf of Harif, Tom Gross presented an award to Mrs Rosemond Nissan, who had devoted 33 years to helping refugees from the Middle East at World Jewish Relief. Michelle Huberman spoke of what tools could be used to promote Jewish refugees: she unveiled Harif’s newMezuzah campaign, recalling the stolen Jewish homes in Arab lands – every activist’s must-have accessory.

As they stepped back out on to the Edgware Road, the ex-refugees in the audience went away fired up with renewed enthusiasm to tell their stories. Indignant Israel advocates prepared to vent their outrage at this neglected issue in letters to the editor – and the hungry simply went off in search of a hummus and pitta in London’s ‘Middle East’.