This is a cross-post from Joseph Weissman

By publishing this post, perhaps I am risking another surreal visit. However, I have some news about Stephen Sizer and members of the American Far Right which I feel is important to share with you.

Our story begins in Ann Arbor, Michigan, where Henry Herskovitz has protested outside the Beit Israel Congregation every Sabbath for the best part of eight years.

Here are some signs held up by Herskovitz’s allies in ‘Jewish Witnesses for Peace‘:

As you can see, there are casual references to Nazism on display alongside racial and religious baiting, as children enter into a house of worship. This style of protest is sadly reminiscent the sort of events that the English Defence League or “Stop the Islamisation of Europe” put on, where places of worship are targeted and their blameless parishioners terrified and vilified. It is a couple of steps away from Fred Phelps’ Westboro Baptist Church.

Watch Herskovitz justifying his approach on Youtube – and pay attention to his colleagues profiled on-screen as Herskovitz is speaking. From 1:10:

Interviewer: “What part of the United States would you say is free of Zionist control?”

HH: “There’s probably a few counties in Idaho but that’s about it, I think pretty much any metropolitan area has been dominated and saturated with the pro-Israeli, pro-Jewish voice. Everyone has sympathy for the Jews. No-one has sympathy for Palestinians or people of colour.”

Henry Herskovitz is widely admired on the American Far Right. Here he is recently with Holocaust denier Michael Hoffman (right) – 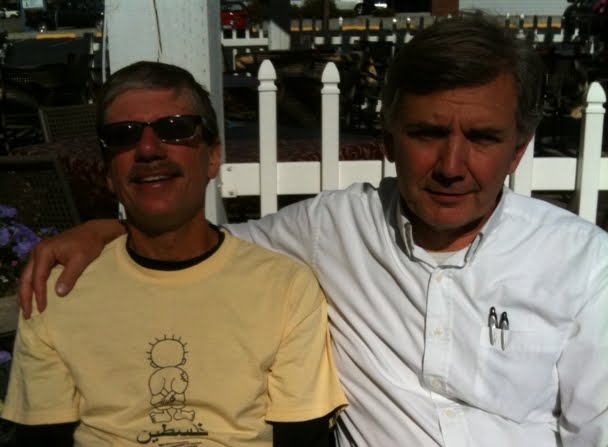 The crime against the Palestinian people is being committed by a Jewish state with Jewish soldiers using weapons displaying Jewish religious symbols, and with the full support and complicity of the overwhelming mass of organized Jews worldwide. But to name Jews as responsible for this crime seems impossible to do.

This may come as no surprise – Herskovitz is on the board of Deir Yassin Remembered where Eisen serves as director alongside Daniel MacGowan, who publicly defends Holocaust denial as legitimate in some ways. DYR have recently helped to promote the Holocaust denier Gilad Atzmon.

Sadly, it seems Herskovitz is a hero among such people for his tactic of picketing a house of worship in the name of “justice”.

Thankfully, the tactic of protesting outside synagogues has been roundly condemned by religious leaders and local councillors in Ann Arbor. In addition, there is an entire web project supported by local community leaders dedicated to curbing the influence of the pickets instigated by Herskovitz.

To these clergy, Herskovitz now has a response:

A much belated response to the infamous clergy letter of 2004, in which some benighted Ann Arbor religious leaders denounced our nonviolent vigils, went online this past Monday. We’re pleased to report that this independent effort is off to an auspicious start with the Rev. Dr. Stephen Sizer having graciously and courageously agreed to provide the first signature on “Religious Leaders Support Jewish Witnesses for Peace and Friends” […] We thank the Rev. Dr. Sizer for his adding his good name to this effort and look forward to seeing the signatures of other religious leaders soon.

Curiously, the JWPF petition bears stylistic resemblance to Rev Sizer’s infamous letter to the Independent, both of which end with a quote from Amos 5:24.

The key sentence in the petition is this:

We, the undersigned religious leaders, affirm the tactic of protesting outside a place of worship as appropriate and consistent with our prophetic and religious traditions.

Yet Stephen Sizer is not confined to the margins of Christendom, but sadly he is broadcast to the masses, interviewed only recently by Premier Christian Radio’s Andy Peck on the ‘Leadership File‘.

According to the interview, the United States are like the Biblical patriarch Jacob, favouring “one of the Semitic races over the others” – just as Jacob preferred Joseph.

And once again, Rev Sizer is left unchallenged about citing Holocaust denier Dale Crowley in his book on Christian Zionism.

Indeed, the fruits of prejudice from the American Far Right are being processed through Stephen Sizer’s theological blender, and mainstream Christians are now tasting this bitter drink.

Surely this is cause for concern for Jewish-Christian relations in the UK.