Last month I noted that the amusingly-named Islamic Human Rights Commission (UK sponsor of the Khomeini-inspired anti-Israel Quds Day) had scheduled its Fourth Islamophobia Awards for December 9 in London.

I wrote that it was possible to vote (by categories for different parts of the world) for nominees on the IHRC website, and that the commission had thoughtfully provided a means to nominate additional candidates for the award. I said I had submitted the name of Sudanese President Omar Hassan al-Bashir– the man responsible for the deaths and suffering of more Muslims than anyone else in the world in recent years– for an “Islamophobia Award.”

In the comments box, “Transistor” wrote:

I have just nominated Harry’s Place.

To which I responded:

Hmm. Guess I better get my tuxedo out of mothballs.

Well I suppose I should confess that I don’t really have a tuxedo, in mothballs or anywhere else. But maybe I should get one because:

Harry’s Place has been added to the list of UK nominees for an Islamophobe of the Year Award.

OK, with competition like Jack Straw, Melanie Phillips and Tony Blair, we’re admittedly a long shot. But as the candidates for Oscars tell us every year, it’s an honor just to be nominated– especially by the IHRC, whose standards of human rights are quite flexible when it comes to regimes like the Islamic Republic of Iran.

What would happen if a Harry’s Place representative tried to attend the ceremony– y’know, just in case?

Oh, and by the way: President Omar Hassan al-Bashir has still not been added to the IHRC’s list of nominees.

If we turned up to their awards ceremony dressed like this, the Khomenists of the IHRC would look more kindly on us: 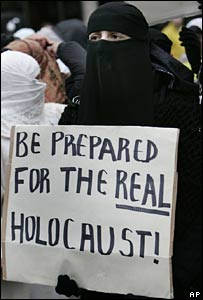